Nick and I were honored to be invited to the Board of Directors meeting for Riverside County to honor RCRMC for their recent achievement of attaining certification as a Level 2 Trauma Center. We have no doubt that the trauma team at Riverside County Regional Medical Center is the reason why Nick is still alive today. They saved his life 18 months ago and we’ve maintained an awesome relationship with many people at that hospital. Nick was asked to be the “human interest” testimony to their expertise and jumped at the opportunity to help. Shoot, it was the least we could do. We’d like to do more.

Two weeks ago Nick sat down for an interview with them, and a week later, we were meeting some of the major players at RCRMC and reconnecting with the ones who saved his life.

The awesome people who make it happen at RCRMC. Boy do we stand out like a couple of sore thumbs. 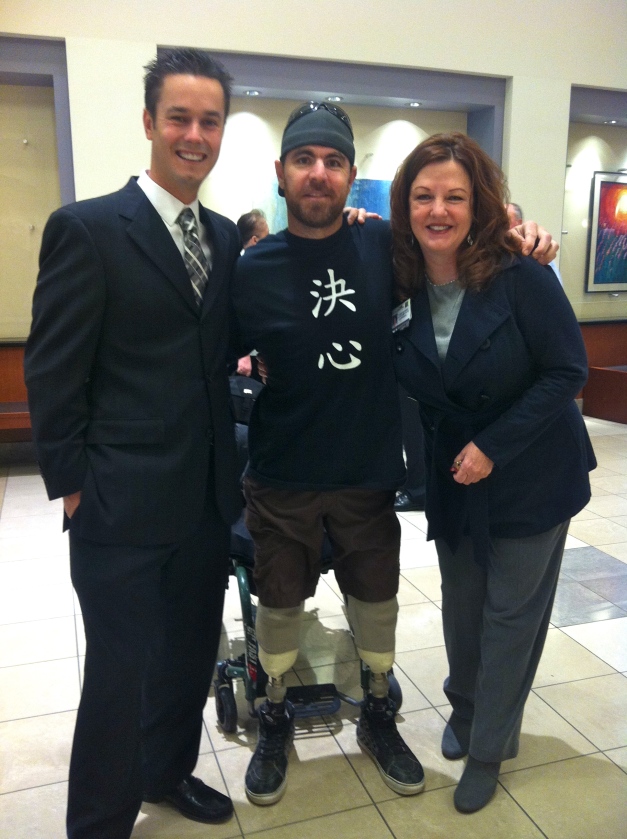 Nick with Tommy and Robbie, the two amazing people who are helping Nick get back into the hospital and volunteer (hopefully!)
Tommy was with Nick in the ER the night of the accident and helped save his life. Forever grateful!

Front and center, waiting for the meeting to begin.

Mr. Bagley, the hospital CEO received the certificate and spoke at the meeting, then passed the microphone to Nick to tell about his experience with the trauma center. Nick had two main points he wanted to impart to the audience and Board of Directors: the trauma team’s quick and accurate assessment of his injuries and immediate mobilization to fix them is the reason he’s still alive, and the outstanding way the staff treated his family and friends with respect and dignity meant the world to him.

Congratulations RCRMC, you absolutely deserve this validation of a job well done. What an honor to be involved. Thank you so much.

Below is the press release written by Ray Smith, a Riverside County spokesman with a huge heart and fun sense of humor who came to our home with ChaiTae and Sean, who was on our case at the time.

“I wouldn’t be here to tell my story,” he says resolutely. “I was in the best place possible.”

While videotaping two skydivers who were on a tandem jump in May 2011, the right side of Fener’s parachute collapsed at about 100 feet and he hurtled to the ground in a corkscrew. At the county medical center in Moreno Valley, surgeons removed his ruptured spleen and treated two broken vertebrae, spinal-cord damage, broken ribs, and legs so devastated by fractures that one ankle disintegrated and Fener was missing three inches of shin bone. Several weeks later, surgeons amputated both legs below the knee.

Fener’s fiancée said the hospital staff not only saved his life, they helped her deal with the sleep deprivation, loneliness and fear she endured for more than a week while Fener lay in a coma.

“Their quick decision-making and assessment of Nick absolutely is why he survived,” Lindsay Showalter said.

That life-saving expertise was recognized recently when the American College of Surgeons confirmed the hospital as a Level II trauma center, the only such adult trauma center in Riverside County. Fener and Showalter are expected to attend tomorrow’s (11/27) presentation during the Board of Supervisors meeting in Riverside to recognize the certification by the College of Surgeons.

Trauma centers strive for the certification because it demonstrates a hospital’s ability and commitment to caring for severely injured patients. Staffed 24 hours a day, the trauma center admits more than 1,100 patients each year.

The College of Surgeons does not designate trauma centers but, rather, confirms that a center has demonstrated it provides the highest quality of care. The verification follows a site visit in June by a review team from the organization, which established the hospital’s trauma center designation through April 2014.

Today, support rails lining the hallway of the couple’s Menifee home are ready to come down. Fener walks around on aluminum and titanium legs, sometimes stumbling but rarely falling, and figures he’s about halfway through the physical recovery. Day by day, he inches toward a goal that some might think foolhardy – returning to work as a skydiving instructor.

One of his biggest steps comes in about a week when he will jump from a plane for the first time since the accident. With 4,200 jumps since 2001, Fener isn’t nervous about the next leap and anticipates “an old comfortable feeling” mixed with the elation of his first time.

Fener and Showalter, also a skydiving instructor, look forward to a day when the accident does not define their lives. Ask where they will be in five years and Fener can’t say for sure. But the vision is that he will be skydiving full-time, enjoying life and traveling with Showalter.