Nick tried to do lunges for the first time today, propped between two wood thingies. It didn’t work, and we realized lunging is not a good idea. Lesson learned. And part of that lesson is that you can’t find your limits unless you test them. Or something like that. 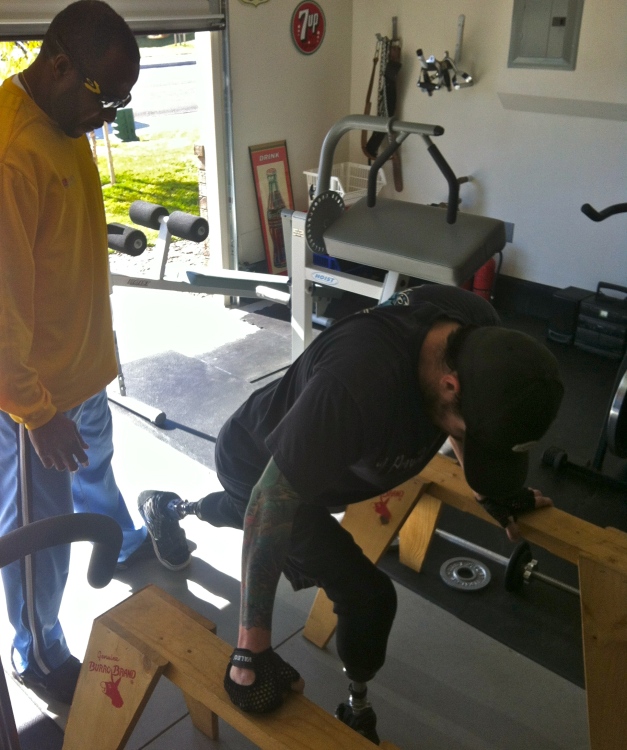 Nick finally stood up a landing! It was pretty windy, but dang, were were excited!

Seconds after touching down… giving each other a high five for standing up his landing.

Posted by lindsayf on January 11, 2013
Posted in: Uncategorized. Leave a comment

Nick’s trainer is out of town this week, so I’ve been kicking his butt instead.

I’m really proud of his persistence. Today I could see he really wanted to quit after the second round of exercises, but he pushed through. It was tough, and he kept up at a good pace.

He’s exhausted though. I asked him what kind of internal monologue he had going on in those moments of wanting to quit. He told me he kept reminding himself that he had worked so hard just to be able to move around and be stable on his feet, that if he quit the workout early he would just be laying down doing what he used to do back when he was wishing he could be working out. Did that come out right?

We’ve been doing multiple circuits of weight lifting with short bursts of cardio, him on the stationary bike, me on the treadmill. You know what they say: a family that sweats together, stays together.